Flu, RSV, and COVID: Your Best Options for Testing and Treatment

Barrett's esophagus is when the normal cells that line your food pipe (esophagus) turn into cells not usually found there. These new cells take over because the lining of the esophagus has been damaged. The new, abnormal cells are called specialized columnar cells.

It is very rare that someone with Barrett’s esophagus will get cancer of the esophagus, but it may raise your risk of developing esophageal cancer.

You may get Barrett's esophagus if you have  frequent heartburn (gastroesophageal reflux disease or GERD, also called acid reflux disease) that lasts for many years. You may also get it if you have swelling of the esophagus (esophagitis). These health problems hurt the lining of your esophagus and can cause the abnormal cells to take over.

You are at greater risk of getting Barrett’s esophagus if you are over 50 years old, male, white, and obese.

Each person’s symptoms may vary. Some people with Barrett's esophagus have no symptoms. Others have symptoms caused by GERD, including heartburn, reflux, or trouble swallowing.

Your healthcare provider will give you a physical exam and also do a test called an endoscopy. A long, thin tube (endoscope) is put in your mouth and gently pushed down into your esophagus.

The endoscope has a small camera to help your health care provider see the lining of your esophagus. A small tissue sample (biopsy) will be removed through the endoscope and sent to a lab to check if your normal cells have been taken over by abnormal cells.

If you are having trouble swallowing, your healthcare provider may also do an upper GI (gastrointestinal) barium study. This test may show if you have a narrowing (stricture) of the esophagus. This narrowing happens when the damaged lining of the esophagus gets thick and hard.

Your physician will suggest an individualized care plan for you to try to stop further damage by keeping acid reflux out of your esophagus. Medications such as proton pump inhibitors or acid blockers reduce the production of acid in the stomach. This will also treat GERD symptoms.

Other treatment options may include:

Endoscopic surveillance: Every three years, the physician will used an endoscope to check the lining of the esophagus to see if any abnormal tissue is present, and can remove a small sample to examine (biopsy). 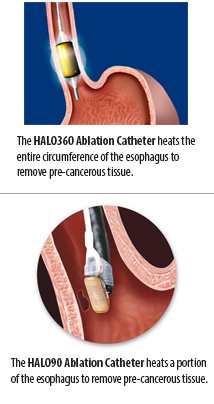 Endoscopic radiofrequency ablation therapy: Cooper now offers an outpatient treatment that destroys the pre-cancerous tissue in the lining of the esophagus that occurs with Barrett's esophagus. During the procedure, an ablation catheter (HALO360 or HALO90 Ablation Catheter) is positioned on the abnormal esophageal tissue. Using the HALO Energy Generator, the physician delivers a rapid burst of ablative energy, which removes a very thin layer of the diseased esophagus by heating it. The procedure is performed in an outpatient setting, without incisions, and takes less than 30 minutes on average.

To make an appointment with a digestive health specialist with experience treating Barrett's esophagus, call 800.8.COOPER (800.826.6737).