Sarah Ruter just knew something was not right with her almost-10-month-old son, Isaiah. She, her husband and their baby had flown from their home in central Iowa to visit friends and family and do some sightseeing on the East Coast in October 2013. But for about four days, Isaiah had been unusually fussy, had stopped breastfeeding, and seemed weak and dehydrated. Not knowing what to do, they took Isaiah to two South Jersey pediatricians, who referred them immediately to Children’s Regional Hospital at Cooper. 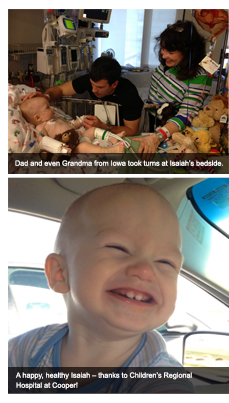 In the Pediatric Emergency Department, Isaiah was admitted immediately and given a battery of tests: ultrasound, CT scan and an MRI to systematically rule out several possibilities. He was transferred to Cooper’s Pediatric Intensive Care Unit (PICU). Some facial and airway paralysis had occurred in Isaiah, so he was intubated and put on a ventilator immediately.

Once they realized they’d be staying in New Jersey for some length of time, Sarah and her husband, Dan, connected with the Ronald McDonald House in Camden for housing, and both of Isaiah’s grandmas flew in from the Midwest for extra support.

“Twenty-four hours a day, we always had family with him at his bedside,” shares Sarah, who describes those first critical days as “some of the scariest of our lives.”

Dr. Tara Marie Smith, Division Head of Pediatric Critical Care and Medical Director of the PICU, details the diagnosis Isaiah was eventually given of infantile botulism. “The paralysis was a key indicator of botulism,” explains Dr. Smith. “Botulism manifests differently in adults than in infants with immature digestive tracts. You or I might get sick – but for an infant, botulism is life-threatening.”

Botulism spores exist naturally in soil, and Dr. Smith said it’s likely they were brought in from the outdoors and picked up in Isaiah’s daily crawling and moving around.

Within 48 hours of initial admission, Isaiah was treated with botulinum toxin, commonly known as “Baby BIG” (botulism immune globulin). Botulinum toxin does not cure the illness, but dramatically shortens its duration. Prior to Baby BIG’s development, a child with botulism could be confined to a hospital for a month or more. All told, Isaiah stayed in the PICU for 11 days.

“Within two days of treatment, we saw a significant improvement,” reports Dr. Smith. Sarah and Dan were most relieved by his first smile since falling ill, which happened once he was taken off the ventilator and was able to start nursing again. “Very honestly, we were terrified – and then we saw that smile, and it turned to joy.”

Sarah has much praise for the staff that assisted the family throughout their ordeal. “We were so surprised and pleased at how everyone at Cooper – physicians, nurses, and other staff – helped us and made us feel as comfortable as possible during the worst time a parent can go through,” she said.