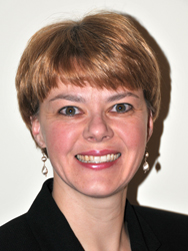 Brigitte M. Baumann MD, MSCE is a Professor of Emergency Medicine at Cooper Medical School of Rowan University. In 1991, she graduated from Harvard University magna cum laude with a BA in Germanic Languages and Literature. She attended Cornell Medical College, where she was elected to Alpha Omega Alpha and received her medical degree in 1995. Dr. Baumann then went on to complete two years of an internal medicine residency at the University of Pennsylvania. After an auspicious change in career plans, she completed her emergency medicine training at the University of Pennsylvania (1997-2000) and served as chief resident in her final year. She has been at Cooper Hospital since August 2000.

Early in her career, she earned her master's degree in Clinical Epidemiology and Biostatistics at the Center for Clinical Epidemiology and Biostatistics, University of Pennsylvania. Dr. Baumann served as the Director for Clinical Research (2001-2002) and then as the Division Head for Clinical Research (2002-2014). To date, she has coauthored over 100 peer-reviewed manuscripts and nine book chapters. She has mentored hundreds of pre-medical students and scores of resident and faculty researchers. For her dedication to medical education, research and the practice of emergency medicine, she has received numerous awards, including an Academic Achievement Award (New Jersey ACEP, 2011) and South Jersey Magazine Top Physician (2012). Her current interests include her ongoing research and faculty development.

Dr. Baumann is well-published in her field. To see a full list of her publications, please click here.