Simon A. Sarkisian, DO, MS, FAAEM 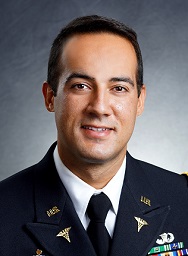 Captain Simon Sarkisian is an active duty U.S. Army physician who is currently serving as the Emergency Medicine Physician on the 274th (Airborne) Forward Resuscitative Surgical Detachment stationed at Cooper University Hospital in Camden, NJ as part of the Army Medical Department Military-Civilian Trauma Team Training Program. He is an attending physician in Cooper's Department of Emergency Medicine.

Capt. Sarkisian was awarded the U.S. Army Health Professions Scholarship Program scholarship in 2011 and graduated from Touro University in California with a Doctor of Osteopathy degree in 2015. He attended the Emergency Medicine residency program at Carl R. Darnall Army Medical Center in Fort Hood, Texas. In 2018 he graduated his residency program as a chief resident. Capt. Sarkisian's first duty assignment after graduation was at Cooper University Hospital.

In 2020 to 2021, he was deployed to Baghdad, Iraq with the 115th Field Hospital. In 2021, he was deployed to Kabul, Afghanistan with the 82nd Airborne Division. Capt. Sarkisian enjoys teaching medical students, residents, and military/diplomatic rotators both in the Emergency Department as well as the Trauma Bay. Capt. Sarkisian has authored/co-authored numerous publications in emergency and military medicine. His interests also include operational/austere medicine, disaster medicine, and emergency preparedness.