What is an iliac aneurysm?

A large iliac aneurysm can burst, which can cause life-threatening, uncontrolled internal bleeding. 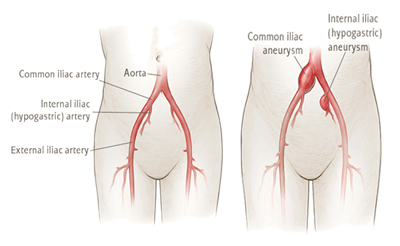 You are at higher risk for an iliac aneurysm if you:

Symptoms of an iliac aneurysm

If the aneurysm tears—known as a dissection or rupture—you may experience a sudden, sharp “ripping” feeling. If that happens, even if the pain subsides quickly, you should get to a hospital immediately.

How an iliac aneurysm is diagnosed

Your physician may perform some or all of the following tests to determine if you have an iliac aneurysm:

An iliac aneurysm is often detected as part of another procedure or test being performed.

Treatment includes simple measures that you can take, as well as surgery if necessary.

Iliac artery aneurysms have traditionally been treated by surgical reconstruction. Now there is also a minimally invasive option—endovascular stent grafts—that are effective in treating both aortic and iliac aneurysms.