Cervical cancer originates in the cervix, a connective tissue at the lower portion of the uterus connecting to the vagina. Each year, about 14,000 women in the United States learn they have cervical cancer. Cervical cancer is one of the most common types to affect a woman’s reproductive organs. Most cases of cervical cancer are caused by the human papillomavirus (HPV).

Before cervical cancer appears, the cells of the cervix go through precancerous changes known as dysplasia, abnormal cell growth that has the potential to spread around the body. It is these abnormal cell changes that an annual Pap test can help to detect. For some women, these changes may go away without any treatment. More often, they need to be treated to keep them from changing into cancer.

Because so many women do have Pap tests annually, deaths from cervical cancer have decreased greatly and are now rare in the United States. Chances of successfully treating cervical cancer are highest when detected early.

There are two main types of cervical cancer each developing in different tissue. The most common (about 80 to 90 percent) are squamous cell carcinomas. The other 10 to 20 percent are adenocarcinomas.

The most important factor of prognosis is the stage of the cancer. The stage will determine the treatment options and outcomes. Treatment options are the same regardless if a cervical cancer is squamous or adenocarcinoma. 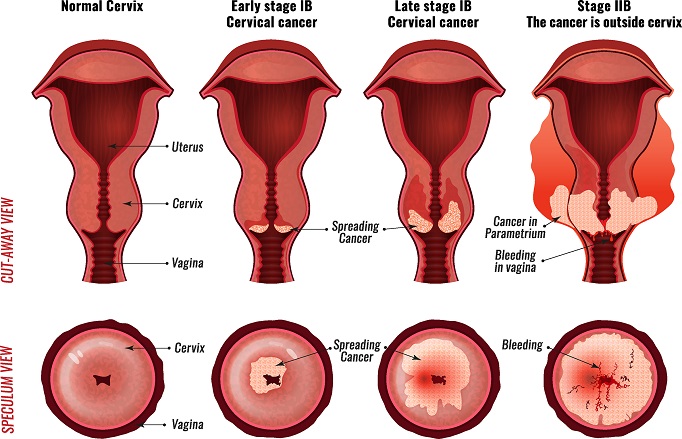 A sexually transmitted virus called the human papillomavirus (HPV) causes almost all cases of cervical cancer. HPV usually goes away by itself. Most people with HPV never even know they have it. But sometimes an HPV infection can cause problems. HPV can be categorized into two groups: low risk and high risk. Some high-risk types of HPV may stimulate the growth of precancerous cells in the cervix. If these abnormal cells are not found and treated, they may become cancerous.

Women with certain risk factors may be more likely to develop cervical cancer. These factors include:

Early cervical cancer usually has no noticeable symptoms, but it can be detected with yearly check-ups that include getting a Pap test to check for abnormal cells in the cervix.

Possible signs of cervical cancer include vaginal bleeding and pelvic pain or discharge, although other conditions may cause the same symptoms.

You should see your doctor if any of the following problems occur:

Make an Appointment With a Cervical Cancer Expert